Japanese knotweed is a noxious, invasive plant that lives along streams, spreads easily through flood events, and disrupts the environment in the process. And it is here in the San Geronimo Valley, where it poses a serious threat both to environmental and built systems and has the potential to cause significant damage to the San Geronimo Creek and Lagunitas Creek watersheds.

While Japanese knotweed is not the only non-native plant in our watershed, its aggressive nature makes it a bigger threat. No plant species is inherently good or evil. But some plants are more liable to overrun their environments than others, and Japanese knotweed is one of these plants.

Although its stems resemble bamboo, Japanese knotweed is actually a member of the buckwheat family. It’s a shrub-like perennial with hollow stems and grows up to 8’ tall each summer before dying back in the winter. Distinctive characteristics include spade-shaped leaves with a flat base, zig-zag stems, and plumes of small cream-colored flowers that appear in mid- to late-summer.

The plant is known for its vigorous growth, growing 4” per day during its peak season. Not only does this allow it to outcompete other vegetation, establishing monoculture stands and reducing native species, it also prevents tree seedlings that are important to nutrient cycling from regenerating. As a result, salmon are impacted by the loss of leaf litter and shade from new trees. In addition, Japanese knotweed can grow through asphalt and septic systems and through cracks in home foundations. While it has an extensive root system, its roots fail to keep soil in place on stream banks, leading to increased erosion.

Japanese knotweed was first identified in Lagunitas Creek in 2011. While we don’t know when it officially arrived in the Valley, it probably was first introduced as an ornamental planting and we are only now beginning to see the impacts of its spread.

While it won’t be easy, eradication of Japanese knotweed on both public and private land is possible with your help. 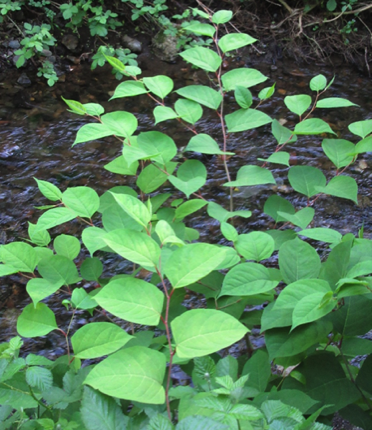